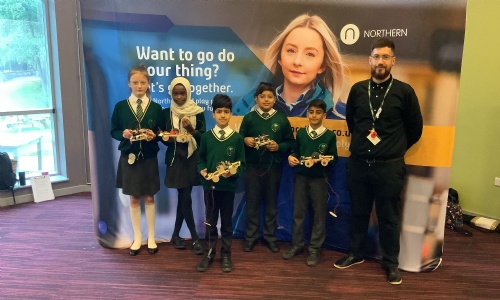 Last week, some children from year 6 took part in a celebration event at Bradford University.

The event was to celebrate the children’s engineering work and to test and compete the vehicles they had made against other schools from the Bradford area. This process involved being interviewed by leading engineering professionals from Schneider Electric, as well as from Northern Rail about their vehicles, and testing their vehicles in a series of events, such as the straight line test, the ramp test and the distance test.

We are so proud to announce that two of our children won awards! Well done to Hassan for winning best communicator out of all the schools who took part, and Affan, who won Second Prize overall for his car and how it performed in the series of challenges and tests. St. Stephen’s is so proud of all of our young engineers! Well done!